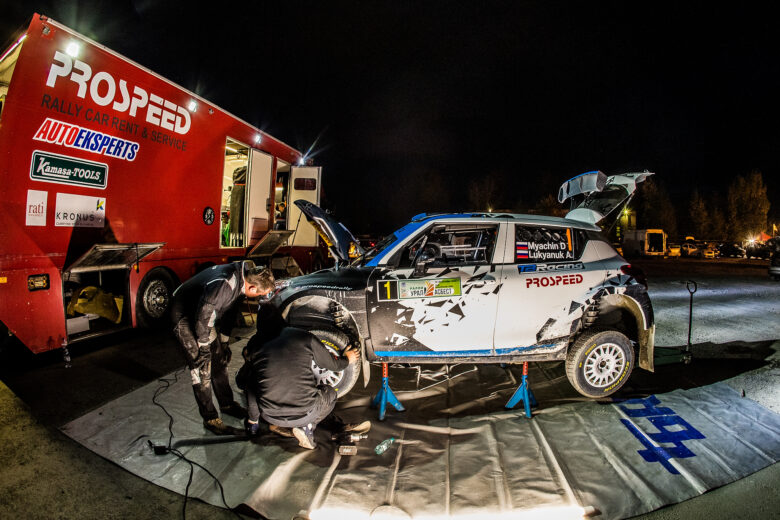 About the first day of the rally Uralasbest 2020

Two special stages and lots of emotions are behind; let’s give the floor to the guys:

Dmitry Myachin, driver, «We started the first special stage very well; literally during a few kilometers we felt confidence in the car. Indeed, I got incredible pleasure from the track, from the way the car is driven – from everything! Somewhere a few kilometers before the finish line, the car… stalled completely. We tried to understand what was going on. From the instruments, we realized that the throttle valve didn’t react to anything and quick adaptation didn’t help; after that we removed the pipe and saw that the damper was simply jammed, perhaps this was some kind of defect. The metal expanded from heating, and the throttle was jammed so much that we couldn’t even move it with our hands; we were only able to knock the valve off with a screwdriver – it returned the unit to a working state, so we’ve finished. We went to the second special stage, trying not to be very aggressive and without emotions, just drive carefully and work. During the second pass I was driving so that I thought I was losing my pace, but in terms of time it turned out to be quite the opposite – telemetry showed that the pace was excellent! During the service it turned out that the component was indeed defective and was replaced with a new one».

Alexey Lukyanuk, co-driver, «Well, the car is cool! It drives really fast! We worked well at the tests, today we’ve made the notes good – we did such a high-quality job. Dmitry took a very good pace from the first special stage! It is clear that he lacks 4WD experience, but at the same time the car allows him to rush cheerfully; I even got high on the right! Unfortunately, we had some technical difficulties – the throttle valve was defective. During the second pass, we improved and reached the finish line. The car jumps perfectly well, that is, we “flew” there almost at full throttle on the Avianosets springboard – the liftoff was at a speed of around 155 km/h! It behaves very well in twisted corners, perfectly holds the bend; the balance is very pleasant, it allows you to enjoy very vigorously and dynamically.

And I’m a good guy, reading the “reversed” notes! That is, all drivers often have the direction of the corner first, then the graduation number (right five, for example); and Myachin, on the contrary, has the number first, and then the direction (two left, 50, six right, and so on). At first the brain refused to perceive it, I wrote and read wrong. But now it’s working, and this is a very interesting training for the brain, I think. It looks like learning a new language; it turns out that all the time you need to tune yourself in order to be in focus, concentrated, not to relax and read carefully. An interesting kind of challenge for me, we’re not bored!»

Tomorrow is a full racing day – 137.24 km of total distance – and there will be new emotions!