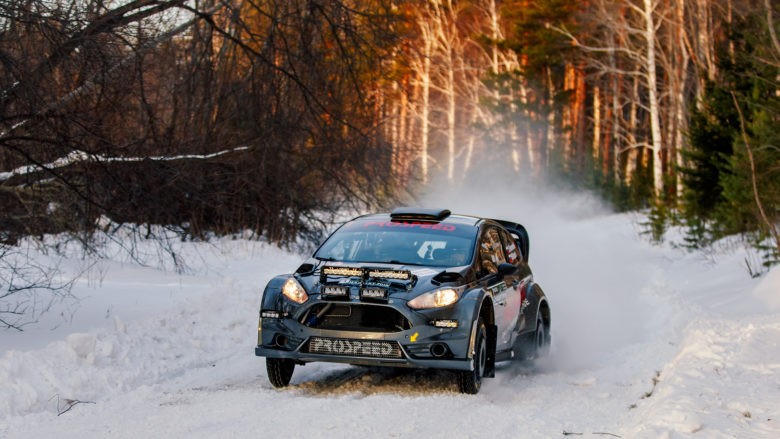 Sergei Remennik and Mark Rozin, who became the European Rally Championship regular participants, started last weekend at the fifth round of the Russian Cup – the “Malachite 2019” rally. The Ural crew in Ford Fiesta Proto declared their ambitions from the very first kilometers of the race.

Having started, the crew began to understand the specifics of driving a completely new and unfamiliar car of the Prototype class that is significantly different from the usual Mitsubishi Lancer Evo X that guys used for a lot of races in national championships and several seasons in the FIA European Championship.

It should be noted that the Prototypes are allowed to participate only in the overall standings of the Russian Rally Championship, where drivers can score points; at the Russian Cup events the crew in such a car does not get any points – they can participate in the rally along with the rest of the drivers, not interfering in the fight for the series title.
In the Baltic countries Prototypes are also scored in the overall standings on a par with R5 cars and WRC cars (iterations of different years, prepared according to technical requirements for participation in the world championship).

Sergei and Mark finished the first day of the race with an advantage of 14.6 seconds over their closest rival Denis Rostilov (only at the first special stage they won 27.4 seconds from him), but during the four special stages of the second racing day the situation has changed – Denis Rostilov celebrated a victory, and Sergei Remennik became the runner-up with a 2.2 second lag! On the first day this pair of rivals broke away from the closest pursuer Igor Smirnov for 1:11.2 minutes, and on the second day increased this gap to 2:03.2 minutes at the finish of the rally!

Prior to the start of the rally Sergei had several test kilometers to deal with the character of the new car and understand what changes should be made to his usual style of driving in order to use the opportunities offered by a lighter and nimbler car more effectively. But the main study of the car capabilities fell on the “testing ground” of the Chelyabinsk rally special stages.

Sergey Remennik, driver, “On the first day of the rally it was interesting and fast – wide roads for maximum speed with jumps. On the second day it seemed to be slower, but it wasn’t. The second day tracks were slightly looser, narrower than the day before, with many places where acceleration-braking took place. We seemed to get used to the car, but you won’t try everything and take unnecessary risks during the race. In the course of the rally we tried to understand the
pace, and how we can go to maintain the advantage. At the finishes of special stages it was reflected in peculiar duels between Denis and me – we won them by turns.

When Denis and I were talking a week before the rally, he told me that he would participate in it. “You don’t want an easy race,” he said. And I’m very grateful to him because it was very interesting to drive! I think the facts that Denis Rostilov was driving here and that we brought the Prototype to this race should be interesting for the local audience. It is clear that Rostilov and I are competing with ourselves more, and I drove out of the standings and didn’t bother anyone to fight for the Russian Cup points.

We still need to work with the notes – to record it accurately and read on time. Of course, four months break makes itself felt, it is rather difficult for everything to happen perfectly. I didn’t want to disgrace myself. Aleksey Lukyanuk helped me on the first day of the recce – we slightly “corrected” my visual estimation and discussed how this car can behave on the track at certain moments, roughly speaking, how easily you can make the notes. And on the second day we were recording the track only with Mark, remembering the coach’s recent advice.

Of course, this rally turned out to be an equation of several unknowns raised to a power by our long break in races. But the car forgives a lot of driving mistakes and aggressive riding by non-optimal trajectories. It is much easier and more nimble. If you didn’t get into a turn in the Lancer, you will slide longer and wait until the car extinguishes the speed. In the Fiesta the same thing happens several times faster, and the suspension with its travels just “eats up” all the pits – it is incredibly cool! It’s a very interesting vehicle! It seems that I got caught up with this “forgiveness” of mistakes when I ran-off into a snowdrift at the final special stage and lost 20 seconds there (laughing)”.

At this point every rally fan asks the question, “What’s next?” We confidently say that the story with Prototype will continue! But not in the closest sporting plans. After all, the new season in the FIA European Rally Championship starts very soon – the 54th Azores Rally will open the European performances program for the crew of Sergei Remennik and Mark Rozin on 21-23 March.
The motto of the European rally is, “Got talent? Prove it!”