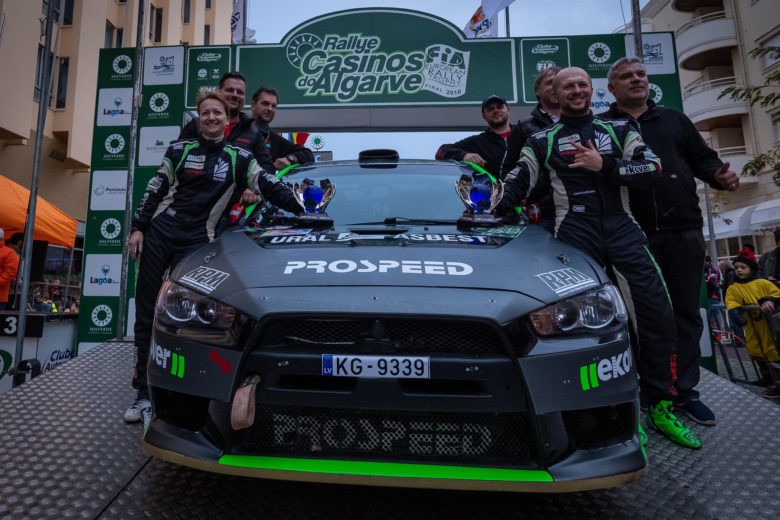 The European Rally Trophy 2018 final round ended on Saturday in the Portuguese Algarve; its entry list consisted of 34 crews from 11 countries, including Russians. The duet of Sergei Remennik and Marina Danilova from Russian Performance Motorsport team won the rally in the ERT 2 division and won the European Trophy among crews in production cars.

The Friday route was tight and dynamic, representing a double passage of two asphalt special stages in the Monchique Sierra mountains. And after the midday service the action ended at thethe Super Special Stage from Lagos City Hall. An additional intrigue was made by the surface changing from passage to passage: at every turn, where it was possible to cut, a large amount of gravel and soil was brought to the asphalt. In these places the grip tended to zero, and there were lots of turns in the mountains.

Much like the roads through the Algarve’s Monchique Sierra, featured many twists and turns, the finishing crews order in the ERT-2 standings also changed from stage to stage. The Portuguese Ricardo Costa won the first two of them, and the next two were conquered by Sergei Remennik, however, the turn of his Mitsubishi Lancer Evo X at thespecial stage Alferce did not allow him to finish the first leg as a leader. William Mavitti and Mustafa Çakal finished third and fourth in succession. Moreover, the Turk also could not avoid problems at the Fóia 2 special stage, but he lost much more time.

Sergei Remennik, driver, “Amazing rally, in fact, very difficult. It was really cool! At the very first special stage we were turned around in the hairpin because of my annoying mistake, and the car hung. We thought that we wouldn’t go back to the track. And the whole race was like this – with cliffs at the edge of the road and some other similar things – it really braces up! Ricardo Costa was very fast. We gave him a head start in 20 seconds at the first special stage, and then quietly “bit off”, so there was only 2 seconds between us by the end of the first day!”

On the second leg the rally roads were laid in the same area as the day before. The route was divided into two sections of three special stages, and the finish podium was located on the shores of the Atlantic Ocean in the beach town of Portimão. The positional game between Ricardo Costa and Sergei Remennik did not happen, because during the sixth special stage of the rally the Portuguese had troubles with the steering that forced him to abandon his further struggle and retire.

Sergei Remennik, driver, “On the second day there was also a quest – would it rain or not and what kind of rubber should we use for this asphalt? Everything was incomprehensible. In the end I decided that we would use a hard mix for asphalt and it worked. We were determined to fight, but, unfortunately, the Costa’s car power steering was broken down. And then it was an easy victory, because the other guys couldn’t pursue us.

The road surface is a separate issue, because it was not a rally, but a rallycross. Rubbish in the “cuts”? Oh, there are so many things brought to the road by the wheels! Just to understand the grip level: “nails” on ice are super cute, asphalt tyres on clean asphalt are very-very cool, on gravel – just cool, but asphalt tyres on dirty asphalt, and somewhere on gravel or mud – this is a complete …, in short, it doesn’t hold. But in the end everything went well (laughing). We reached the finish line, and I can say that Marina is really great! She reads the notes nicely and feels my driving style. She is an incredibly experienced co-driver and I believe that this rally was excellent thanks to her!”

Marina Danilova, co-driver, “The rally was good! There was such an easy schedule at the recce, and then during the race everything was very fast. The special stages are good: interesting, narrow, slippery in places, even scary a little, with a change of pace. I have to say a couple of words about the Monchique stage – it’s a road “for adults”, with tattered pace and spectacular cliffs, it offers a great view, but it’s a little bit worrying to drive there (laughing). It’s good we didn’t have to push hard at this stage”.

Sergei Remennik and Marina Danilova won Rallye Casinos do Algarve in the ERT 2 category, the Turkish crew of Mustafa Çakal and Mehmet Köleoglü took the second place, and William Mavitti and Brian Daniels ended their second visit to Portugal with well-deserved bronze award.

A short off-season comes in the European rally, Sergei Remennik and his regular co-driver Mark Rozin plan to have an ice test session at the Arctic Circle in late December.

But the awards ceremony goes first! The second cup in a career in the FIA European Rally Championship is waiting for its place on the shelf – for the second place in the ERC 2 category (Production). The winners honoring ceremony will be held on 3 December in Paris.

We also recall that Sergei and Mark became the European Rally Trophy prize-winners in 2016, when they took the third place in the production standings.