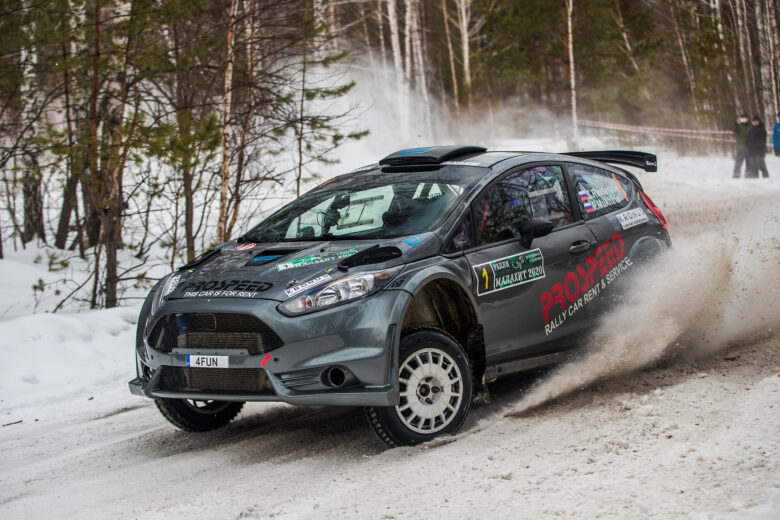 25.02.2020
NewsComments Off on 2020 Malakhit Rally: Sergei Remennik is second in overall standings

How to be on the podium of the Russian Rally Cup round, which took place  in Kyshtym? We have already known Sergei Remennik’s recipe for what to do when you really want to drive, but there is no time to distract from studies for a long time. You just need to go to the middle of nowhere and drive the rally that traditionally takes place during the holiday dedicated to men.

The car for participation in the rally was the “Evo in a compact body”, that is, the Ford Fiesta Proto prototype built by the Prospeed team using Mitsubishi Lancer Evo units. The crew included an unfamiliar for that team, but professional co-driver Polina Mukhina, as Mark Rozin, the permanent Remennik’s co-driver, had a busier work schedule. A break in the sports car driving was almost a year, and only several test days were planned in order to remember everything before the rally start.

The 2020 Malakhit Rally entry list included 41 crews; six of them participated in all-wheel drive cars. A prototype class car turned out to be good for “touring guests”: crews competing in such vehicles do not interfere in the struggle of the Russian Cup, because they cannot claim to receive points.

On the first day that consisted of two special stages, one of which took place in the dark, all six crews in four-wheel drive cars took suitable positions in the intermediate classification that did not change until the rally finish. Remennik and Mukhina completed the race in the second place, leaving the leading position to Denis Rostilov and Georgy Troshkin.

From the very first kilometers, Rostilov showed the fans an aggressive driving with late brakings before corners. But Remennik did not feel so confident behind the wheel – he was driving more calmly, but the turnaround at the special stage and the lack of pace turned into a 40-second lag by the first day results. By the second day, Sergei Remennik was not so far behind Denis Rostilov – from 1 to 3 seconds at the finishes of special stages. Such a pace can be considered a good result for someone who did not set any tournament tasks for the rally.

Sergei Remennik, driver, “Oh, I love the Malakhit rally! Especially for the road along which the “Tyoplaya gora”, “Kuvatal” and “Slyudorudnik” special stages passed – this is why we all love Malakhit. It’s also very cool that the organizers made two passes of the last special stage, as a super stage at the WRC – twice in a row; this is a very good solution for the audience. As for us, Polina adapted to me quickly; there were no questions about reading the notes at all. I asked again in some places, but it was at a time when attention shifted to the intricacies of driving.

By the beginning of the second day we got used to driving a little bit and went fast, but I still can’t go very fast yet. What to expect, if you travel once a year? Still, the break has its effect, but the result, I think, is pretty good. Of course, Denis Rostilov excited me again, so I plan to have tests and drive some race. It’s cool, when someone rides at a high pace and makes you focus, many skills return quickly, but something has been already lost – there’s no tone. And you just need to do a little bit more to raise it”.

Polina Mukhina invites the driver to ride to mark at TC

Polina Mukhina, co-driver, “My return to rally was fun, as if I was forging through the subconscious; I also didn’t drive for a long time. Racing is both cool and scary a little bit, when you rush through a dark forest at a speed of 198 km/h. But it’s cool, a good shot of adrenaline! Sergey’s notes were simple, familiar to me, and I adapted to reading them quickly. But we both tried to get used to speed more. It seemed that Remennik was accelerating and sometimes wondering how wow it was”.

If Sergei Remennik really succeeds in adding more rally to his schedule, then fans will be able to see the Ford Fiesta Proto from the Prospeed team on the tracks near Asbest in May. The 8th round of the Russian Rally Cup 2020 will be held there from 15 to 17 May.