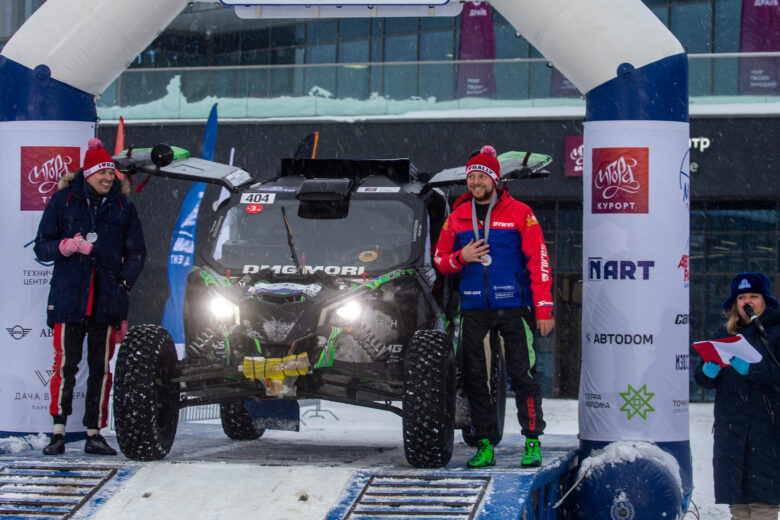 Sergei Remennik and Yaroslav Fedorov won the T4 standings of the Baja Russia Northern Forest – the opening round of the FIA ​​World Cup for Cross-Country Bajas. In addition, the debutants took the second place in the T3 standings of the round of the Russian Cross-Country Championship and the FIA Eurasia Zone Cross-Country Rally Cup. This dull beginning of the press release does not express the entire mood of the crew – just think about it: at the very first start in the cross-country rallies Remennik and Fedorov managed to secure the victory in the most prestigious cross-country rally series in the world! How do you like that?

But Sergei Remennik did not fade away in unusual conditions – on the contrary, he became so bold that he dared to get involved in the fight with the very experienced cross-country fighter Anastasia Nifontova! A competitor of various cross-country rallies and marathons, a prize-winner of the Baja Russia Northern Forest and the Silk Way Rally, a Dakar competitor – it is a pleasure to fight with such a rival.

Before the start of the Sunday special stages the crew of Remennik and Fedorov lost to the duet of Nifontova and her co-driver Ekaterina Zhadanova for only eight seconds. Agree, it was a shame not to try to compete with them for the first place in the T3 standings of the Russian Championship.

So, Sergey and Yaroslav thought the same! They rushed along the track of the penultimate special stage with the fifth result in the overall standings, outpaced Nifontova by thirty-five seconds and took the lead… But after counting the penalties, it turned out that the situation was not so rosy – the cross-country rally debutants exceeded the maximum speed limit four times, for which they got a forty-second penalty.

At the final special stage of the race, Sergei Remennik and Yaroslav Fedorov slowed down a little bit and finished it with the fifth result – Anastasia Nifontova became the third there.

So what is the result? In the FIA World Cup for Cross-Country Bajas round the Remennik/Fedorov crew participated in the T4 standings. The Polish crew of Tomasz Bialkowski and Dariusz Baskiewicz secured the victory here. Sergey and Yaroslav took an honorable second place, but at the post-finish in-depth scrutineering it turned out that the SSV of the Polish racers did not meet the technical requirements and they were disqualified.

As a result, Sergei Remennik and Yaroslav Fedorov became the winners of the Baja in the T4 standings!

Sergei Remennik, driver,“We are at the finish line – the goal has been achieved! That’s what we did, it was cool. I can say that I enjoyed driving the long stages and I think we will continue. These were the first cross-country rallies in my life. Yaroslav and I have so far driven the longest special stages, probably only in Finland – there is a special stage “Ouninpohja”, about 30 kilometers. Yaroslav has experience in Corsica, where the special stages are 50 kilometers long. But there has never been such an experience of 120 kilometers until now, now there is. It is very interesting from the point of view of how to prepare yourself, to count your strength for such a distance. I understand that this is not the longest distance, as in multi-day marathons. Experienced racers say that at the Baja Russia Northern Forest the advantage is on the side of the classic rally drivers and I agree with them. I only missed the usual notes, because in some places it was possible to push hard from jumps to closed corners. Because you leave the corner and you understand that you could put pressure on the gas to the last there. But, as my senior comrades told me, the cross-country rallies principle is: “if you don’t see, you don’t drive”.  Well, I tried not to drive if I didn’t see it”.

Yaroslav Fedorov, co-driver,“It was very unusual for me here, as if I were a useless element. I kept silence a lot here, I have never been so silent at the special stages. There was even an opportunity to chat during the day at Baja, so it seems to me that I underperformed. But we are at the finish line – this is the most important thing and a very cool experience. I liked today, because the special stages were more like roads in our classic sense. And if at the first passage we were turned around twice, now we had an absolutely clean passage. We are waiting for the official results; something tells me that we did a good job”.

Baja Russia Northern Forest is behind. Both the driver and the co-driver are satisfied with their debut in the cross-country rallies. To be continued?