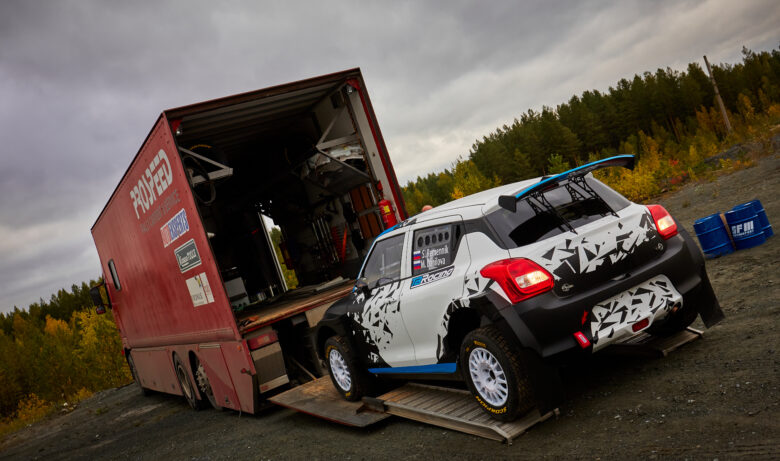 19.09.2020
NewsComments Off on Oreca Suzuki Swift R4 premiere: Dmitry Myachin and Alexey Lukyanuk will test a kit car at the Uralasbest 2020 rally

Sergei Remennik and Marina Danilova have planned to bring a completely new rally car to the Russian tracks, but luck came to rescue… Sergei told about it on his Facebook page. However, there will be the premiere!

Well, let’s show our cards completely! The car from the TBRacing team, which is the official partner of ORECA (manufacturer of universal solutions based on R4 KIT). The R4 KIT was developed with target performance goals just below the R5 class at reasonable purchase prices, particularly at substantially lower development costs. Most wear parts for the R4 KIT are series parts or standard components that can be bought locally.

As Sergei Remennik cannot test the car in a competitive mode, during the Uralasbest 2020 rally it will be driven by two fast drivers – Dmitry Myachin, the sports team head and the fastest driver of 2WD vehicles on the entire Baltic coast, and Alexey Lukyanuk, a hot fellow, whose performances are distinguished by entertainment, desperate struggle for victory and high sports spirit.

Before the rally start, the guys had two test days and shared their first impression of the “car from the box”.

Dmitry Myachin, first driver, “I like the car very much! The most important impression is that for the first time in my life I got behind the wheel of a 4WD car and understood everything at once – what was happening and how it needed to be controlled. From the first kilometers I felt confident behind the wheel very quickly with the help of Alexey”.

Alexey Lukyanuk, second driver, “The car looks technically like an R5, you look at all the components – suspension elements, etc. – everything is very high quality: fit of parts, workmanship and interior, and all elements under the hood are at an excellent level. It’s a sports car with all the necessary components – a short steering rack, competitive brakes, and long travel suspension. But it’s a little bit weaker in terms of motor power and not as, so to speak, ideal as the R5. But it makes a good impression, responds well to settings and is very fun to drive, and the acceleration dynamics to 160 km/h is not inferior to R5 class cars».

The Asbest rally tracks are a great place to test this car because they are very technical. Acceleration, braking, various gradations of turns, and jumps – there are absolutely all the road elements! The only minor confusion is the rain forecast on the main racing day. Indeed, on dry surface on the day of recce it is impossible to determine what it will be in a wet state.

Perhaps the main question among fans on social media is will they change places while driving? The crew has not yet reached a consensus about it, but why not?

Dmitry Myachin, «“It’s clear that Alexey can win the race with anything, even with a VAZ, but from the team leader point of view – Lukyanuk needs to demonstrate this car potential, not just drive for pleasure. And I have to show this car capabilities for ordinary rally drivers”.

The start of the Uralasbest 2020 rally is scheduled for 18:00 Saturday local time (+2 to the Moscow time zone). You can watch the crews online on the rally organizer’s page or in live video feeds from the rally special stages.

17.40 – Start of the broadcast, presentation of the crews.

13.00 – Finish of the first leg. Live broadcast from the service park.