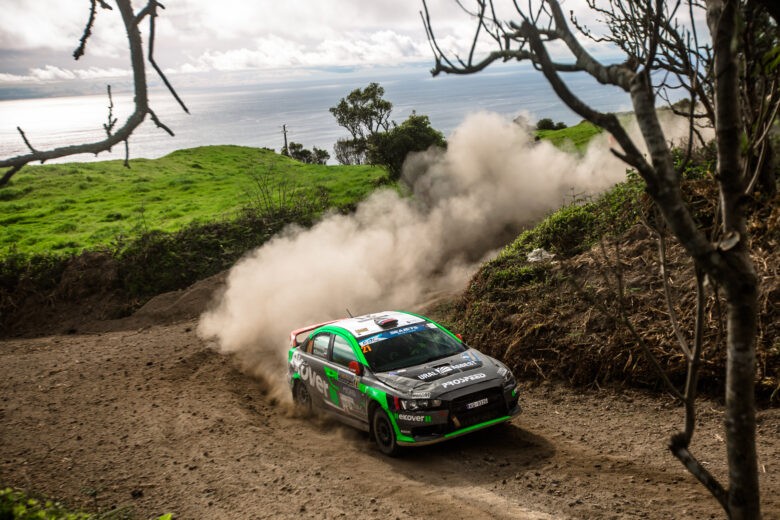 The first full day at the Azores Rallye has come to an end – Aleksey Lukyanuk and Aleksey Arnautov are keeping the lead in the overall race standings. Driving a new car, Lukyanuk combines the process of studying it with the ability to score points in the new season.

As for the Russians, taking part in the Production standings of the Azores Rallye, this day was not as positive as the previous one for Sergei Remennik and Marina Danilova. Having completed Thursday as the ERC-2 leader, today Remennik have had to cede leadership to Juan-Carlos Alonso.

The day turned out to be nervous for the Argentinian, and it even seemed that everything was lost: having punctured a tyre at the first special stage of the day and hit the car on the road fence, he lost half a minute about the result of Sergei Remennik. Then the gap increased to seven minutes – this was facilitated by another wheel puncture, at the same time the grip did not sustain and a problem with the drive shaft was discovered.

But friends and rivals on the race track divided the troubles equally – in the second half of the day it was the Russian’s turn. The broken powersteering on SS7 cost Remennik over a minute and was only a sign of more troubles to come. Just a few hundred meters after the start of the second passage of the 24.17 km “Sete Cidades” stage the wheel of the Mitsubishi Lancer Evo X picking up a puncture, and then the second puncture reducing what had been a gap of over seven minutes at midday service down to just 43.0 seconds before the final special stage.

Sergey Remennik, driver, “The day started very well, even my overly optimistic ride on the finish kilometers of the special stage on the volcano couldn’t spoil it. There was a fairly simple and wide turn, where the car slid to the shaft and hit with the rear part, and there was a wall about two meters high, we stuck into it. We were thrown back to the road in the right direction; we drove on, just slowed down a bit. During the day service mechanics repaired this damage.

And in the second half of the day everything went wrong slowly. First, the booster “disappeared” (we found the cause, tightened the connection and refilled the fluid – it started to work), then we punctured the wheel and changed it; after that we did it once again… Everything could have been fine, we had 40 seconds of advantage over Alonso before the final special stage, but… before the super special stage start I turned the key in the ignition lock and nothing happened, although the battery was working, and the lights were on”.

On Saturday the crew will take the opportunity to start with the rally2 system, getting the penalty time for the missed special stage to their result.
Tomorrow the crews will be offered five special stages, but the length of each is impressive: two dozen kilometers at once along the winding roads of a tropical island will force each driver to summon his concentration and attention to the maximum.

« FIA European Rally Championship 2019 season has started!
First points of the season: when nothing is lost »